At the 1999 Academy Awards, the "In Memoriam" portion of the ceremony honored the directors, writers, producers, choreographers and actors who had passed on since the previous year, airing clips of their finest performances in a final salute to their marvelous work for the motion picture industry. At the end of the tape, the images of two men came up on the screen: Roddy McDowall and Frank Sinatra. They matched each other clap for clap as the audience showed its appreciation of these legendery men. Although the average moviegoer doesn't recall the name "Roddy McDowall," that night the Hollywood community proved that it hadn't forgotten one of its greatest supporters and one of its best actors. 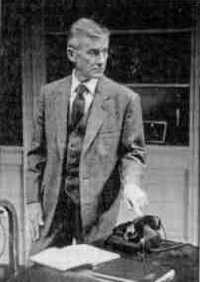 I saw Roddy only once in person, at the Fisher Theater in Detroit, Michigan a few years before his death. I'd gotten a front-row seat for the performance (well, more of a fourth-row seat, but the rows curve near the stage, and being on the end put me next to the boards with an unobstructed view). He had a supporting role in the play, "Dial 'M' for Murder" as a detective, and although he struggled with the consistency of a Scottish dialect, he performed the part well.

At one point in the play the heroine, played by actress Nancy Allen, went into a monologue as the other actors stood and listened to her. Roddy had a pad of paper and a silver-and-black Bic pen in his hands, pretending to scribble an occasional note on the murder investigation. He alternated his gaze between Ms. Allen and the paper in his grasp, his body turned in my direction and his head down.

At this point I shifted my attention to him, interested in this Hollywood legend, this former child actor, this friend and secret-keeper to an untold number of movie industry professionals. It had been his name that inspired me to attend this play, after all. He looked smaller than I'd expected, but that's always the way with people on film or television; they're never the giants they seem to be. He looked old, too, but not in an unpleasant way-the years had been kind to him, and I thought he looked quite handsome, possessing a quiet, mature dignity…

He lifted his head and looked at me, and I found out something about him that I hadn't suspected.

Roddy McDowall had strength. Despite his small, thin frame, despite his soft voice and delicate mannerisms, his spirit had a backbone of iron. Instantly, I found that I had encountered an individual with greater self-control and a stronger resolve than anyone I'd ever met. His eyes had a hooded quality, appearing coal-black under the theater lights and because of the angle of his head, and as I watched, his gaze made a subtle and almost imperceptible shift. The closest imagery to describe the change would be that of a curtain as it is raised partway off of a stage, and you get a glimpse the shadowy brick wall at the back of the theater. The curtain, or rather his character, lifted from his consciousness for a moment and I found myself looking at awe into the soul of Roddy McDowall, the man.

Our gaze only met for several seconds before my nerve broke, and I copied everyone else in the theater by riveting my attention to Nancy Allen… but I will always remember that look. It's been carved into my soul.